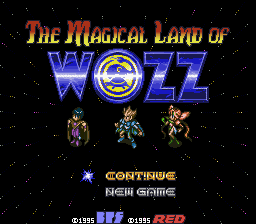 Cho Mahou Tairyku Wozz, known to most as simply ‘Wozz’ was a game produced by Bullet Proof Software in 1995. While at first glance, Wozz may seem like your average SFC RPG, it’s actually quite a bit more. One of Wozz’s most original features is that of creating your own vehicle and items. The graphics really have a nice tone to them. They come across fresh and original while still being similar in nature to other RPGs. The graphical effects are very nice for the SNES, some of which are an original take on things that have been done many times before. The ocean on the overworld map is one such example. The music in the game is top notch, although I wish there were more of it. The battles play out similar to Ogre Battle and/or Breath of Fire 2, so if you liked either of those games, you will probably like Wozz’s battle presentation and gameplay.

The story in Wozz is nothing new and has been done before, but what makes Wozz stand out is it’s focus on humor in the script. Wozz is a very lighthearted, humorous game that often makes fun of itself. This is what seems to be the charm that many people like. A demon has fallen to Wozz called ‘Balaam’. Poison rain has fallen on the inhabitants of Wozz causing them to turn into creatures. Three ‘heroes’ are called forth from the human world to help save Wozz. The 3 heroes are of different races (American, Chinese, Japanese) and are told they cannot return to their world until Wozz is freed. Quite irritated, the three heroes reluctantly set out not having much of a choice. That’s the basic premise of the game. Choose any of the three characters to play, and the story will branch in several cases accordingly. With the vehicles, item crafting, and branching story, Wozz was ahead of it’s time!