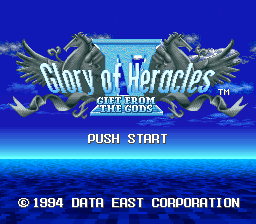 Herakles no Eikou IV (translated as Glory of Heracles IV: Gift from the Gods) is the fourth game in a series that started back in the NES days. The first two games were made for the Famicom while the third and fourth parts were made for the SFC. There was also a side story for Gameboy. I choose the fourth game to translate because that was the game that captivated me the most, and was the most fun to play. With the completion of the fourth game, the entire series has now been fan translated to English by different groups and can be found on ROMhacking.net.

This game has several high points that make it stand out above others. For starters, it has a very nice opening title sequence. The sun rises over the ocean while going into some beautiful shots with seagulls flying, with some nice Mode 7 effects. This sets the stage for what is to come. There are several instances throughout the game where you can see little details that show the developers really cared about this project. The screen moves left and right during battles, almost giving it a 3D feel. I don’t recall seeing this presentation in any other SFC RPG. The graphics are circa 1994 in quality. They are not quite up to standards such as Chrono Trigger or other later games, but they are colorful and pleasing to the eye, and much attention was given to detail. The music is very fitting and really helps set the atmosphere of the game. The presentation overall is top notch in my opinion and worthy of trying out on that alone.

The story starts with three friends who grew up with each other in Atlantis. Events soon unfold that find all three murdered and separated from each other. Thankfully, there is life after death. You play as one of the three friends and start your journey to recover your body, find out what happened to you, and find out what may have happened to your friends. You get to choose from around 100 bodies to inhabit along the way. Not long into your journey, you will run into the legendary Heracles, whom will surely aid you in this quest. Immerse yourself in Greek Mythology, Heracles, and a story filled with eternal life, death, and Pandora’s Box!