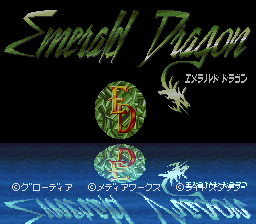 Emerald Dragon is an RPG that has spanned ports across several systems. It has been on the PC88/98, MSX, x68000, PCE-CDROM(Turbo Duo), FM-towns, and the SNES! There must have been something about this game to warrant so many ports. It’s got good graphics, above average sprite animation, some beautiful hand drawn artwork, and some nice music too! Take that, and add a fairly original story line, and a quick battle system, and you have Emerald Dragon.

Tis the world of the dragons and the world of the humans… Draguria and Ishban. Dragons are cursed to never enter the human world or face certain death. One day, a small human girl is found shipwrecked on Draguria. She is the first human seen in many years. The girl, Tamryn, is raised by the dragons. She grows up with, and grows close to the dragon named Atrushan. Tamryn later leaves to set out to Ishban. She’s given one of Atrushan’s horns to call for him, wherever she is, if she ever needs him. Time goes by… Tamryn blows the horn. Using an ancient dragon scale of long ago, Atrushan transforms himself into a human, and is able to go to Ishban, the human world.

Atrushan sets out to find Tamryn, discover why he was needed, and to unravel the mystery of the curse and the current problems the human world is facing. Of course, he isn’t roaming the world alone. He quickly meets with and acquires the companionship of a host of delightful characters.