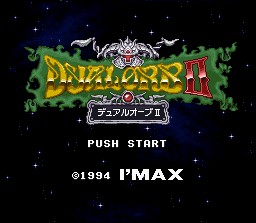 Dual Orb 2 is an RPG released in 1994 by a small company I’MAX. It had excellent graphics for the time, and the music is still wonderful even by today’s standards. The story of Dual Orb 2 follows the adventures of a mysterious child found in the mountains by the High Priest of Garade, named Aleth, and his best friend Lagnus, the Prince of Garade .

The world once held an advanced civilization much as the one our world has today. One day disaster struck, civilization destroyed. Many years passed and civilization began to rebuild. An evil empire by the name of Kardosa rose. They attempted to resurrect people from the lost civilization in order to use the ancient technology for their own evil purposes.

One day, Kardosa came to the peaceful kingdom of Garade. Aleth and Lagnus were thrown into the middle of a world struggle for peace. They rescue a mysterious girl underground for thousands of years with no memory, and the death of Lagnus’ father plunges him into a dark struggle within himself for ultimate power. The only hope for the world is an ancient legend of three magical gems that will unlock the ‘Orb’, the ultimate power. Can Lagnus overcome his dark struggle within? Will Aleth discover who he really is, and what destiny awaits him? Who is the mysterious girl found deep underground? What happened to that ancient civilization? These questions and more will be answered in Dual Orb 2.